It is believed that Bhutan was inhabited as early as 2000 B.C. due to the presence of early stone implements discovered in the region.
The country was originally known by many names including Lho Jong, ‘The Valleys of the South’, Lho Mon Kha Shi, ‘The Southern Mon Country of Four Approaches’, Lho Jong Men Jong, ‘The Southern Valleys of Medicinal Herbs and Lho Mon Tsenden Jong, ‘The Southern Mon Valleys where Sandlewood Grows’. Mon was a term used by the Tibetans to refer to Mongoloid, non-Buddhist peoples that populated the Southern Himalayas.
The country came to be known as Druk Yul or The Land of the Drukpas sometime in the 17th century. The name refers to the Drukpa sect of Buddhism that has been the dominant religion in the region since that period.
Initially Bonism was the dominant religion in the region that would come to be known as Bhutan. Buddhism was introduced in the 7th century by the Tibetan King Songtsen Gampo and further strengthened by the arrival of Guru Rimpoche, a Buddhist Master that is widely considered to be the Second Buddha.
The country was first unified in 17th century by Zhabdrung Ngawang Namgyel. After arriving in Bhutan from Tibet he consolidated his power, defeated three Tibetan invasions and established a comprehensive system of law and governance. His system of rule eroded after his death and the country fell into in-fighting and civil war between the various local rulers. This continued until the Trongsa Poenlop Ugyen Wangchuck was able to gain control and with the support of the people establish himself as Bhutan’s first hereditary King in 1907. His Majesty Ugyen Wangchuck became the first Druk Gyalpo (Dragon King) and set up the Wangchuck Dynasty that still rules today.

In 2008 Bhutan enacted its Constitution and converted to a democracy in order to better safeguard the rights of its citizens. Later in November of the same year, the currently reigning 5th Druk Gyalpo Jigme Khesar Namgyel Wangchuck was crowned. 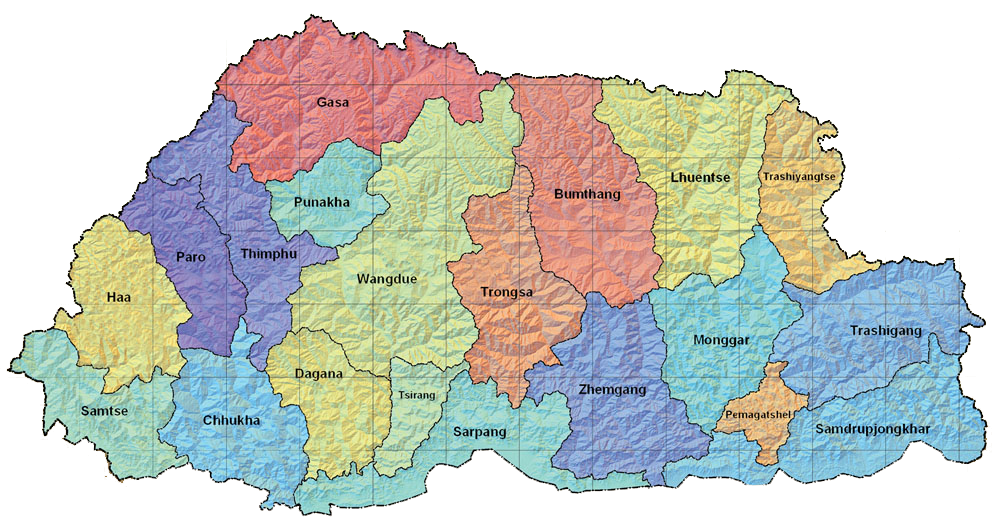 Culture of Bhutan
While Bhutan is one of the smallest countries in the world, its cultural diversity and richness are profound.
As such, strong emphasis is laid on the promotion and preservation of its unique culture. By protecting and nurturing Bhutan’s living culture it is believed that it will help guard the sovereignty of the nation.

Eating habits
Traditional Bhutanese eating habits are simple and, in general, food is eaten with hands. Family members eat while sitting cross legged on the wooden floor with food first being served to the head of the household first.
It is usually women who serve the food and in most cases, the mother. Before eating, a short prayer is offered and a small morsel placed on the floor as an offering to the local spirits and deities. With modernization, eating habits have changed and in urban areas, people usually eat with cutlery whilst seated at a regular dining table.
Traditionally dishes were cooked in earthenware, but with the easy availability of modern goods, pots and pans have largely replaced their use. A typical Bhutanese meal consists of rice, a dish of Ema Datshi, the country’s favourite dish of chili and cheese, pork, beef curry or lentils.

One of the most distinctive features of the Bhutanese is their traditional dress, unique garments that have evolved over thousands of years. Men wear the Gho, a knee-length robe somewhat resembling a kimono that is tied at the waist by a traditional belt known as Kera. The pouch t which forms at the front traditionally was used for carrying food bowls and a small dagger. Today however it is more accustomed to carrying small articles such as wallets, mobile phones and Doma (beetle nut).
Women wear the Kira, a long, ankle-length dress accompanied by a light outer jacket known as a Tego with an inner layer known as a Wonju.
However, tribal and semi-nomadic people like the Bramis and Brokpas of eastern Bhutan generally wear clothing that differs from the rest of the Bhutanese population. The Brokpas and the Bramis both wear dresses woven either out of Yak or Sheep hair.
Bhutanese still wear long scarves when visiting Dzongs and other administrative centers. The scarves worn vary in color, signifying the wearer’s status or rank.  The scarf worn by men is known as Kabney while those worn by women are known as Rachus. Below is a brief breakdown of the different kabneys and their associated rank.
The Rachu is hung over a woman’s shoulder and unlike the scarves worn by men, does not have any specific rank associated with its color. Rachus are usually woven out of raw silk and embroidered with beautiful rich patterns.

People of Bhutan
Bhutanese people can be generally categorized into three main ethnic groups. The Tshanglas, Ngalops and the Lhotshampas.
The other minority groups are the Bumthaps and the Khengpas of Central Bhutan, the Kurtoeps in Lhuentse, the Brokpas and the Bramis of Merak and Sakteng in eastern Bhutan, the Doyas of Samtse and finally the Monpas of Rukha villages in WangduePhodrang. Together the multiethnic Bhutanese population number just over 700,000.
Tshanglas
The Tshanglas or the Sharchops as they are commonly known, are considered the aboriginal inhabitants of eastern Bhutan. Tshanglasare according to historians, the descendants of Lord Brahma and speak Tshanglakha. They are commonly inhabitants of Mongar, Trashigang, Trashiyangtse, Pema Gasthel and Samdrup Jongkhar. Besides cultivation of maize, rice, wheat, barley and vegetables, the Tshanglas also rear domestic animals to supplement their living. Weaving is a popular occupation among their women and they produce beautiful fabrics mainly of silk and raw silk.